The First Lessons in Violence

Perhaps no one since Mark Twain has been so effective in the intimate one-man show style as Bill Cosby. He sits alone on a bare stage and talks, gesticulating with an unlit cigar, occasionally walking about to exchange comments, or humorous insults with his audience, while hitching up his baggy, sagging sweat pants. Much of his material consists of first person observations about his childhood, and family, which he represents as very different from the Huxtable family of TV fame that introduced average Americans to civil and sophisticated middle class family blackness. The night I see him his audience is largely made up of older people who can identify with his stories of ‘Whuppins’ and his mother’s colorful threats of punishment in response to misbehavior; she promised some form extermination. Cosby’s performance is brilliant classic comedy in which a sensitive topic is dealt with obliquely through humor. It seems likely that both Cosby and some  in the audience are relieved to escape into comedy when the subject matter is too serious to speak of; like corporeal punishment of children. We know a child should be treated with at least as much consideration as a pet dog! So we laugh in order not to cry over whupping.

I was raised when spanking of children was considered a parental duty or a virtue:
“Spare the rod and spoil the child!”

It was often administered with a dose of rather cynical regret:
“This is going to hurt me more than it hurts you!”

And cloaked in exaggeration and humor:
“Speak roughly to your little boy and spank him when he sneezes;
He only does it to annoy, because he knows it teases. Be quiet, Pig!” 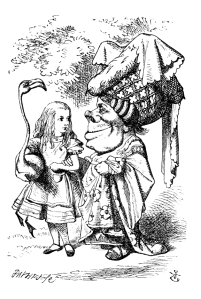 Alice and the Duchess, John Piniel, 1865

Yet ‘spanking’ is a euphemism for striking a child, even though in an adult striking—or sometimes even touching– is considered an assault. Corporeal punishment is, somehow, acceptable in a child but not an adult, even though the child is relatively powerless. Spanking is nominally intended to discipline; to punish; to correct; to improve future unwanted behavior, or even to protect children from the danger.
We are well aware that a dog can be made aggressive by physically harsh treatment. Yet we, as a society, seem more offended by striking of a pet dog than a child. In fact, corporeal punishment is a child’s first lesson in the primordial value of physical violence. It teaches a lesson, the first of many, making clear that might is right.

During youth and adolescence, aggression becomes righteously Darwinian, directed at those who are different from the norm: weak, ugly, dull, foreign. It can take the form of hazing as a rite of passage for the newcomer or the outsider who hopes to prove worthy of acceptance: high school freshmen boys religiously ‘head flushed’ at the nearby gas station; joyous humiliation of college freshmen, or fraternity and military recruits. We tend to take such things as the norm; and, fortunately, serious consequences are rare. Yet hazing’s uglier form is mob violence, rioting, lynching, hate crime, and gang violence including rape.

While often nominally anxious about violence, we don’t act that way when we delight in violent movies, electronic games, TV shows, and degrading literature. We claim that our Constitution protects the right to act, dress, or speak in hostile ways. We tend to look the other way, to ignore or deny alleged, suspected or unproven violence that is hidden in the home. We hope not to get involved.

We remain a society that accepts, rewards and honors aggression. Certainly aggressive violence pays in our most honored and popular ‘contact’ sports. Pays Big Time! Perhaps one can justify that sort of violence. But not the violence that plays a part in many relationships, sexual and otherwise; or in the car chases and brawling characteristic of so many movies and TV shows. Ironically, even a woman’s liberation is often certified when she is aggressive, violent, and foul mouthed, or punches out anyone, especially an offensive man.

It is not automatic for children schooled in violence, to become civil, thoughtful, considerate adults.
I, like many people my age, learned aggression beginning in childhood. I accepted schoolyard violence, especially in males, as normal. Being young–happily normal, omnipotent and ignorant—I assumed my own life experience was identical to everyone’s. I never imagined behavior I thought was normal could be interpreted by another as extremely threatening or aggressive. Those greatest of all teachers, Time and Error, taught me the facts. And when the facts slapped me in the face I understood we are not all societal or behavioral clones, so that violence is best avoided altogether.

Much public debate today focuses on spousal abuse, sexual abuse of children, animal cruelty, sport violence, bullying, aggressive sexual talk or behavior, rape, hate crime or hate talk, racially or sexually insensitive speech, the death penalty, etc. While we, individually, can’t effectively address all of these societal ills, we each can relentlessly condemn corporeal punishment of children. In living our own lives, and in speaking with friends and family, we should insist a child be treated much more thoughtfully than a pet dog. At the very least that can do no harm. I am convinced it can do much good

This entry was posted in Essays on América, Medical essays, philosophical essays and tagged A A Milne, Bill Cosby, corporeal punishment of children, Mark Twain, physicians and violence., Spanking of Children, the nature of humor in addressing taboo subjects, violence in society.

I have not been a consistent church goer but once had a conversation about Institutional Churches with my beloved grandfather, who was a mentor, and a very active minister for more than 60 years until the moment of his death at age 94. I once suggested to him that powerful Christian Institutions did not seem […]

It was a typical overnight in the Emergency Department; busy, but routine. I picked up the chart of my next patient, which was labeled, ‘Animal Bite’. I thought “ Animal? What Animal!?” I considered thethe rabies prevention routine, a subject dear to me because I had done the original study for Cutter Labs to determine […]

Publisher: The National Alumni limited edtion Set #13 prepared in for the original purchaser. 20 Volumes:  5867 B.C to 1902 A.D. Published in 1904. Each volume 9.1 x 6.6 x 1.3, inches; weight: 1.6 pounds. Certification is signed by the editor and secretary, Rossiter Johnson, with an embossed seal of The National Alumni. Originals or translations from […]

Great technological development precipitates societal chaos which—in a generation or so– can lead to constructive cultural and societal change. A specific example was the time when the new technology of cheap paper and printing replaced parchement and hand-scripting. Afterward access to information, or knowledge and debate could no longer be controlled by the Church/ Monarchy […]

Review, Volume III p 209-210 Pliny: The Destruction of Pompeii; with comments on a volcanic eruption, and earthquakes in Chile During the Great Sequester of 2020, I have been deep into The Great Events By Famous Historians , twenty volumes rescued from a long ago garage sale whose details escape me. The frontispage of Volume I […]