Note: These letters are Creative Nonfiction, but accurately coincide with real events.

I was afraid of getting to Guarulhos airport late because of São Paulo flooding or the trucker strikes, so took a cab just after mid-day even though my flight was to leave 8 hours later. Yet the roads were clear of flooding and of striking truckers; traffic was light. Not only is the terminal a comfortable place, but there are a quiet recesses where one can lie down and take a nap on three seats. I did. My flight- on Gol Airlines- as in Goooooooool! was easy, in a very new big Boeing.

Can foreign airlines be safe, new, and competitive–like foreign made cars or off-shore medical care? My daughter’s flight was on Air Canada: San Francisco, Toronto, São Paulo, then a 10 day layover, then Santiago, another 10 day layover, and back to Toronto and San Francisco. Cost: About $1200. She found her journey, by comparison, superior. I found the same thing with Gol. My fare on Delta, not including an extra flight, and change, was $1700.

Thinking Santiago airport transportation would be difficult arriving at 0155, I had checked with a world-class  transport provider; the most reasonable transportation was US$ 85. When I arrived, not only were immigration and customs a breeze at that hour, but a local ‘Transfer’ van cost less than 10 U$D, taking me right to my Rent-A-Home door in the Las Condes sector of Santiago. So much for fear of flood, strikes and 1 AM arrivals in Santiago.

The most striking thing about Santiago, and Chile in general, is its total transformation.  40 years ago the country was among the poorest and stagnant in the Americas; it is now the most successful by any standard measure. Because of the explosive economic and civic growth, the whole North and Western half of Santiago is an awesome expanse of tree-lined streets and parks, with elegant high-rise apartment, residence, and business buildings, surrounded by glitzy suburbs in the Andean foothills

If São Paulo is an earthy, wealthy and crusty old lady, Santiago is the great great granddaughter of a dead magnate who lost everything after WW I –when the nitrate mining industry collapsed  (fertilizer and gunpowder); this decendent rebuilt the family fortune and transformed the family business, taking it to a new level and direction.

As one result Chile became relatively expensive for US travelers during the last few decades. But for Dollar holders 2015 is a relatively favorable time to visit, like much of the world; the Chilean Peso has fallen about 1/5 against the $US.

Even though this is a small country—less than 18 Million people—it has not escaped the world-wide changes addressed in Moises Naim’s book The End Of Power. He claims that historically powerful entities, people, governments, industries, and institutions can neither exercise nor hold on to power, which now belongs to obscure individuals, small business, small countries, informal coalitions, and upstart of all sorts.

As I write, local TV channels are doing live broadcasts of a huge investigation of tax fraud here called Pentagate: the exchange of political advantage (money!)  by holding companies in order to evade taxes. The case has been building for months and is being adjudicated by the Supreme Court: One sees politicians and wealthy fraudsters in handcuffs, being denied bail, and led off to prison.The supreme court proceedings are in the hands of an eloquent elderly judge, who speaks clearly and deliberately, reminding me of our Watergate or McCarthy hearings. The electronic and print worlds are on fire.  See http://santiagotimes.cl/pentagate-scandal-continues-heats/ and this blog: http://blog.panampost.com/editor/2014/12/11/want-responsive-elections-in-chile-fund-them-yourself/

The blogger, in particular, speaks not only to Chile but to the USA, and arguably, the world. 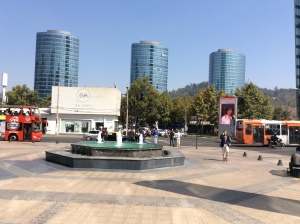 For almost a month we’ve lived in a nicely located Apart-Hotel, in Las Condes. It is on the metro line, and at the crossroads of upscale NW Santiago, the home of fine restaurants, dress shirts, ties, and business suits—-in the young, suits and backpacks–, glitzy shopping, and spiffed high-heeled women with ironed hair who roam this high-rise glass and steel world. These folk lunch in hundreds of sidewalk restaurants, and supper in style. New and expensive hotels are the rule. The picturesque old downtown financial district, a bohemian sector, and the student dominated barrio of small universities in between… are all a short metro or cab ride away.

As in much of the developed world, everyone here complains: approval of government is at less than 30%, of the president less than 20%. No one trusts corrupt and ineffective institutions, abusive businesses, failed efforts to control pollution and degradation of the planet; or our world in chaos: Sound familiar?

But objectively the fast growing middle class here lives well; and the poor live poor, but far less than half a century ago though complaints are almost universal.   Over those decades, by every standard measure Chile is a better and better place for more and more people. Santiago restaurants and hotels are full. The skyline sprouts construction cranes. Roads and freeways are generally new. A tunnel running 15 miles E and W under the main river is a toll road which, when exited, makes automatic charges based on distance; no toll booth, but cameras. How can things be so bad all over the world and look so good?  Yet that is the same all over our planet, if one simply compares life today with 50 , 100, or 500 years ago.There is another great metropolis built almost every month, and that is where most people apparently want to be. Maybe we need to stop listening to the News, and tend our own garden, as Voltaire suggested.

The normal generational change continues but moves faster than ever.Older Chileans are often rather formal,and intense,  preferring never to seem different from one another, reserved, focused, not easily given to unrestrained  pleasures  like dance or song by contrast to the same generations of Peruvians Panamanians, Argentines, Colombians, or Brazilians. Perhaps older Chileans remember the political crises of the 50’s 60’s 70’s, and more easily find solace in the oldest and finest wine industry in South America, and the birth of their new country.

The young educated middle class of  millennials here more closely reflect a developing worldwide norm: active, outward looking, rejecting and objecting to borders, and limits of other kinds. While there is a drug culture  found in millennials here it is, like alcohol, most damaging to the poor and uneducated, or those who lose hope for one reason or another. This crowd of new world young is worth listening to; more accurately, they will speak up whether we listen or not.

Chileans are miners, master builders and engineers of necessity. They work on and under a thin wedge of the earth’s unstable crust between the Andes and the sea. A well-built high-rise building may suffer earthquake cracks, but they are only skin deep. The structures can bend, like willows rather than Oaks; so the best place to be in a major quake is inside a well built building. Outside, deadly stuff can fall on you, you can be swallowed up by a big crack, or swept away by a river whose course is altered… that happened in a small town during the most violent earthquake ever recorded en vivo, near Valdivia, a southern coastal city. http://en.wikipedia.org/wiki/1960_Valdivia_earthquake

Volcanic eruptions, like small quakes,  can  often occur without significant earth movement. They can  be very spectacular with huge plumes of smoke,  ash, and volcanic lightning.  Pictures below are from  three eruptions in places I have visited often: (ongoing!) near Ensenada, a friend’s house, and a unique old hotel full of antiques;   Villarica, earlier this year, near one of the  most elegant  and unique international resorts in the world; and Chaitén near Pumalín, a famous 2.5 million acre eco-park founded by Douglas Tompkins. As spectacular as  eruptions are, they are seldom deadly. They can cause much disruption of life however. This site offers a good idea of how ash affected the small town of Chaitén  .  http://www.boston.com/bigpicture/2008/06/chaiten_volcano_still_active.html

But for us, and many expatriates,  Chile is about extended family: We have 27 cousins for example. Most live in the Metropolitan area between Valparaiso and Santiago. When there we have little rest with visits book-ended between bienvenidas (welcome celebrations) and despedidas (goodbye celebrations); in between are daily get-togethers. We eat, and talk, gossip, and eat. There is rarely a lunch or evening free. We begin to yearn for home, for rest, for our Sacramento humdrum existence!

The Ides of March

The Ides of March

It is the Ides of March, a date that has often been a milestone for Maria. March 15 has always been a personal, private day, and its significance is not shared with anyone, like a secret birthday. She celebrates quietly but expects some important event may take place. This evening, she leaves the dishes to […]

On this wet, Spring morning the same pair of mallard ducks are in the swimming pool ritually courting, eyeing and circling each other with sexy head bobbing. When the pool sweep rudely starts up they go to the creek nearby for the rest of the day, perhaps to continue the ritual, to feed, and build […]

ISBN 9781521035900 English edition: Eleven Minutes 2005 paulocoelhoblog.com Coelho was born in Brazil to a conservative religious family. Over parental objections he decided to become a writer. At 17, his parents committed him to a mental institition though he escaped three times. Released at age 20, Coelho started law school, but soon dropped out to […]

A literate Sink Bug, or Pinnacate Beetle. talks of age, life, death, and the illusion of Life/ Death/ Time.